1. Admire Piazza Maggiore at sunset and/or at night. Truly special! Walk slowly through the square, sit at one of the outdoor cafés or on the steps of the Basilica of San Petronio; make sure to linger a bit to take in the atmosphere. Check out the shadow of the Neptune Statue projecting on the wall of Palazzo d’Accursio.

2. Be romantic in Piazza Santo Stefano. Piazzas are the social hubs of Italian towns and Bologna’s squares are no exception. This is a smaller square compared to Piazza Maggiore, but just as evocative – and certainly more intimate (hint: perfect for smooching!!). You’ll just have to try for yourself 😉

3. Wander the streets of the Quadrilatero, the medieval market where you can browse through the outside stands and old shops selling all sorts of delicacies. Here’s where you can buy all the most famous Bolognese and regional specialties to bring home: tortellini, tagliatelle and other hand-made pasta, mortadella, Parmigiano Reggiano, the signature Bolognese sauce ragù, and local wines like Pignoletto, Lambrusco and Sangiovese.

4. Eat all the Bolognese specialties! Tortellini, sage and butter tortelloni, tagliatelle al ragù, mortadella, crescentine with cold cuts and soft cheeses like stracchino and squaquerone; all to be washed down with the local white wine Pignoletto or red Lambrusco.

5. Burn off all that Bolognese food by hiking to the top of San Luca under the longest portico in the world – 3,8 km and 666 arcades. The reward is the beautiful sanctuary of the Basilica of San Luca at the top of the hill. A side note: the portico is a unique feature of Bologna; the city has 53 km of these arcades that began being built in the 11th century.

6. Climb to the top of Torre Asinelli (another calorie-burning method, right?!). The tower, built at the end of the 11th century, is the symbol of Bologna along with the leaning Garisenda, rising next to it. It’s 498 steep and narrow steps to the top, but the view over the red roofs of Bologna and the surrouding green hills is worth it.

7. Visit the Archiginnasio, the first seat of the University of Bologna, the oldest university of the Western world, founded in 1088. Before the Archiginnasio was built between 1562 and 1563, lessons were held in private or rented houses, in religious venues and sometimes on the squares. The two-story building remained the seat of the university until 1803. Make sure you peek inside the gorgeous and fascinating Teatro Anatomico: this is where corpses were dissected for the first scientific studies of the human body. Not to miss is the library which, with more than 500,000 texts and 12,000 manuscripts, is the largest stocked civic library in Italy. 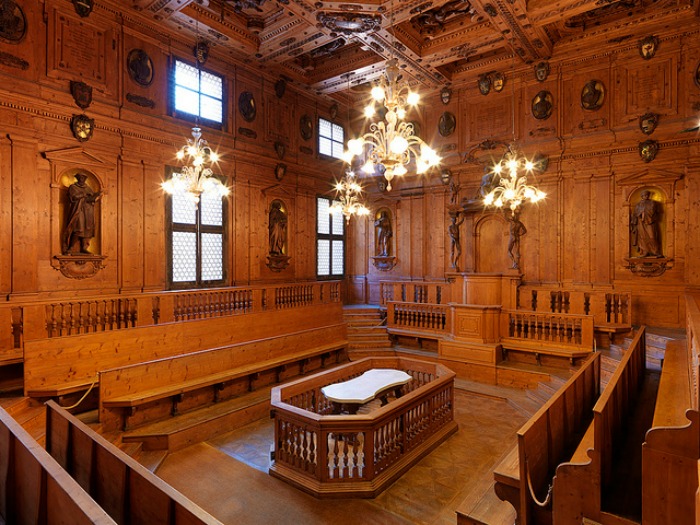 8. Browse the stores of top Italian designers at Galleria Cavour. Ok, this isn’t for everyone’s pockets! Splurge, if you can: choose among Armani, Gucci, Prada, Fendi and many more – if not, try to be content with simply admiring the beautiful Italian fashion!

9. Visit the Museum of the History of Bologna. Housed inside Palazzo Pepoli, the old residence of one the most important families in medieval Bologna, this museum traces the entire history of Bologna, from the Etruscan settlement known as Felsina to Roman Bononia to the height of its power during the Middle Ages and on through modern times.

10.  Finish off the day with an aperitivo at one of the many bars of the city center. A popular drink is the spritz, a drink originating in the Veneto made with Prosecco and Aperol (a bitter variant is made with Campari instead of Aperol). Remember you have full access to the rich buffet, usually laid out around 7 pm, and you can replenish your plate more than once!

Interested in booking a walking tour of Bologna? Get in touch with me! I’m a certified hiking guide and I lead private and group tours in the Bologna hills. Contact me at bolognauncovered@gmail.com. More info on my tours can be found here.

And now, enjoy a video of Bologna made by the Bologna Visitor Bureau!

Rifugio Lago Nambino above Madonna di Campiglio. An easy hike that starts from Piana Nambino, and doesn’t require snowshoes because the trail is well-packed. That also makes it very popular (too popular for my taste), but the landscape around it is just stunning.
A string of crisp, sunny days means great conditions to go hiking in the hills! Here I’m standing right above the mesmerizing ‘calanchi’, a dialectal word used to describe the effect of soil erosion produced by run-off water on clay terrain. Calanchi are typical of the Bologna hills. You can make out the city from these particular calanchi, a very beautiful view. I’m in love with this park!
“The clearest way into the universe is through a forest wilderness.” (John Muir)
In the mood for snow ❄️ • Are you? • Photo taken last winter in the Bologna Apennines.
“Basterebbe una passeggiata in mezzo alla natura, fermarsi un momento ad ascoltare, spogliarsi del superfluo e comprendere che non occorre poi molto per vivere bene.” Mario Rigoni Stern
Posted @withrepost • @uceap_bologna “Winter in Bologna? Nothing like a brisk walk up through the hills followed by a bonfire and local delicacies to warm up the foggy first day of December! With our fav hiking guide @silvia_hikingitaly Vineyard tour, food, organic grape juice & bonfire by Lorenzo Maini” • My second tour for University of California students in Bologna - we defied the weather and went walking in the colli bolognesi despite the cold and fog! #neverstopexploring
%d bloggers like this: